Trumpeters On A Speeding Train

Around 1845 in the University of Vienna, a Physics professor named Christian Doppler postulated a hypothesis that the pitch of sound varied depending upon the location of the listener. This viewpoint at that time was against the laws of nature as people believed them. To prove his hypothesis, Doppler got a group of trumpeters on to a train and asked them to hold a note at the same pitch as the train approached the platform and sped away. People on the platform heard the increase and decrease of the pitch although the trumpeters played at the same level. It paved the way to rethink the nature of sound – and light – waves, and their applications. That proof and Doppler’s subsequent contributions to Physics and the number of inventions that rode on those redefined science and technology as we know them today in every walk of life. A “show & tell” at its simplistic best; triggering change and adoption of the new through a small albeit demonstrably significant “experiment”.
Just hold that thought as we look at our current reality. With most business strategies increasingly becoming innovation-centric, organisations are grappling with the challenge of finding the magic formula to foster more innovation and to manage and adopt the change. The next Tesla, Google or Amazon won’t perhaps come so easily – especially from large, old organisations burdened with legacy technologies, complex processes and most irritatingly, rigid mindsets. Some companies – the same Tesla, Google, Apple and Amazon for instance – continue to innovate even after becoming larger and more complex while others like Kodak, Nokia and RIM lose the race almost to the brink of extinction. If we study the common themes in these organisations then innovation-led growth or failure is not just about technology, strategy, market dominance or resources but mostly about culture. Prevailing “mind sets” I.e., behaviours in an organisation form culture and it is these that make or break an organisation’s sustained creative stamina – the ability to continually reinvent itself and what it offers.

Even the most talented of employees get frustrated or even fail in delivering change because of the “system”. While change management is a vast and complex topic by itself, at an individual level and at team levels employees can influence and move the needle on change. It just requires the willingness and ability to take the small steps, the first steps, without being overwhelmed by risk caveats associated with the larger impact of the change.
So how do you navigate through a stifling culture, cut passive resistance and deliver change without having to take the naysayers head on all at once? One or both of these overlapping approaches work:

1. Manage innovation as a series of multiple small changes and not as one big breakthrough. The ability to decompose a creative idea or a big initiative into several small, simple and meaningful ones is one of the most critical (and rare) skills of a successful change & innovation leader. ISRO (the Indian Government run Indian Space Research Organisation, that launched 20 satellites in a day successfully at a fraction of the cost of NASA launching just one) is a great example of this. A relatively low-key and low-budget technology organisation, ISRO’s scientists work on a number of small, modular projects in an open and collaborative (not competitive) structure in an iterative and scalable manner to assemble a larger program.

2. Run small, simple experiments to prove the concept before selling a broader change. Nothing underscores credibility – and arouses curiosity – like a good old show-and-tell we loved in school. The most frustrating time in any organisation or project is waiting for approvals and the process of working through multiple stake holders fearing mass change. In the late ’90’s I remember while working with PepsiCo how the sales force in India convinced the HQ to invest more and differently in market infrastructure in upcountry territories by running small market experiments in small towns. Signages, refrigerators, financing schemes, route truck upgrades and customising usage norms of brand artefacts locally spurred trade. Rural India was not Corporate America. Proofs and data from these experiments forced global teams to visit these small towns in India and relook at the marketing strategy ground-up. It made a huge difference to Pepsi’s dominance in hitherto untested segments, making the teams and the business an innovatively differentiated FMCG business in the country.

Simple experiments can be done by anyone, at any level. It does not require big budgets. But what it requires, paradoxically, is a big vision and bigger passion. The power of the the trumpeters on train – the power of simple experiments – is an underestimated and under-leveraged tool in most organizations. And therein lies the inertia to change and innovate because everyone is waiting for – and blocking! – a big-bang breakthrough that will supposedly change the world all at once.
Can an individual trying an experiment in this big bad world make a difference? Yes, look at Doppler and several others. No? Sure, look at the Tank Man of Tiananmen Square. More than successful scientists and businessmen who made it big, this little unknown guy is still a world-wide inspiration. He did not fail. He woke the world up. With his own little experiment with a big concept called Liberty. 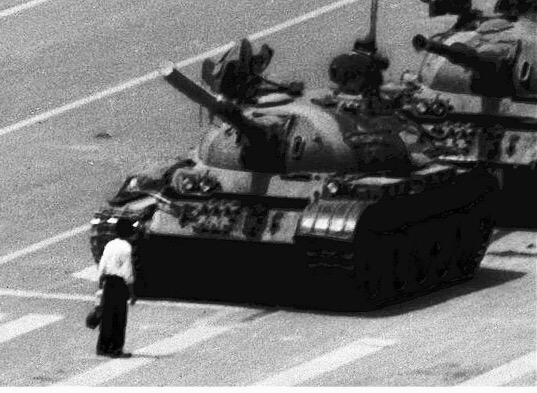 (Pictures from the Internet)

Passionate about technology and future, eclectic & voracious reader, and deeply interested in anything pertaining to management, leadership and strategy. I Love traveling, especially when combined with my interests: from ancient temples, mythologies & architecture, to modern legends- the cusp of the old & the new captures my imagination. Beneath those interests lie a keen observation and incisive analyses of human behavior at work, and an obsessive fascination in connecting seemingly unrelated 'dots'! I teach. From mathematics to management, from school to Ph.D in business. My biggest, life-altering inspirations come from these experiences, the free-flowing interactions with uncontrolled, unconditioned minds. Deeper within I am discovering my real self, my authenticity: an exclusive but all-giving friend-for-life, a spiritual aspirant, a seeker of true knowledge and someone who values integrity of thought-word-action as one truth above all else. My beliefs are deep, several and unshakable: in the human spirit to serve all, in the power of visualizing & materializing our future, in the miracles I see & experience everyday everywhere, in the inner strength and focus as weapons to conquer any challenge and, pervading all, in my God Bhagawan Sri Sathya Sai Baba. I am touched by your kindness in visiting my digital thought-scape. Like life, it is evolving and like spirituality it will hopefully go deeper within. Thank you for your precious acquaintance!
View all posts by NTAK →
This entry was posted in Uncategorized and tagged Business, Change, Experiments, Innovation, Leadership, Management, NTAK. Bookmark the permalink.